A costume designed from The Crown discussed recreating Princess Diana’s most memorable looks for the small screen – including her famous “revenge dress” – in an interview with The Times.

It was the the same evening, King Charles confessed to being unfaithful in a TV documentary, admitting what he said he did, but saying it only happened once the marriage “irretrievably broken down”.

According to Princess Diana’s close friend Anna Harvey, quoted in a 1997 Vogue article, the royal originally feared the black mini dress would be “too daring” and planned to wear a Valentino design at the wedding. event, but after discovering her ex-husband’s documentary, wanted to “look like a million dollars” on the rough night.

Now the look has been recreated for series five of The Crown, with Netflix show buyer and costume assistant Sidonie Roberts telling the outlet that the look represented “the birth of an icon for women around the world. entire”. 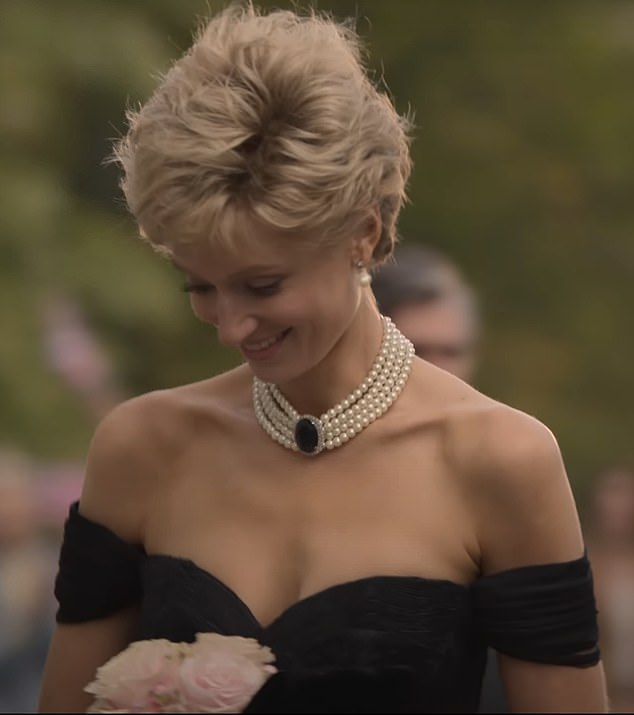 The outfit, including the pearl necklace with a large sapphire, was recreated for Netflix’s royal drama (Pictured: Elizabeth Debicki playing Princess Diana in series five of The Crown)

Sidonie, who oversaw the recreation of the fashion moment, said: “We cannot overstate its impact.

The look can be seen in the trailer for series five, which will stream on Netflix from November 9.

In a short clip from the trailer, the fictional Diana (played by Elizabeth Debicki) is seen arriving at the Serpentine Gallery’s summer party in June 1994.

That same night, the BBC King’s documentary Prince Charles: The Private Man, the Public Role was released to the public in a bid to restore his reputation after his divorce.

During the infamous interview, the monarch admitted to journalist Jonathan Dimbleby that he had been unfaithful in his marriage – but only once he had “broken up irretrievably”.

According to Sidonie Roberts, buyer and costume assistant on The Crown, recreating the Royal Family’s well-known outfits involved “a considerable amount of research” (pictured: Diana, Princess of Wales at the Serpentine Gallery fundraising gala in 1995 ) 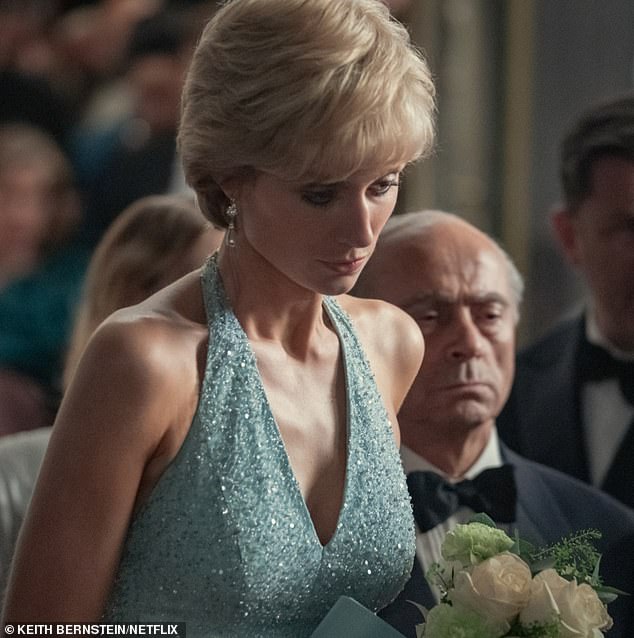 A similar dress was shown in the programme, but worn by the actor playing Diana in a scene depicting one of Diana’s last public appearances, when she attended a Royal Swan Lake gala for the English National Ballet in June 1997 (pictured: Elizabeth Debicki playing Princess Diana in series 5 of The Crown)

The black mini dress is just one of the outfits recreated by the show. According to Sidonie, there is “a considerable amount of research” involved in recreating the well-known ensembles worn by the royal.

She told The Times that the production team was aware that “everyone is waiting for these moments”, and so they “try to do them justice by being as close to reality as possible”.

Another outfit that may look familiar to royal watchers is a blue mini dress with a plunging collar, which is almost identical to the one the princess wore in 1995 to a Serpentine Gallery fundraising gala in Hyde Park.

However, the scene actually represents one of Diana’s last public appearances, when she attended a royal Swan Lake gala for the English National Ballet in June 1997. 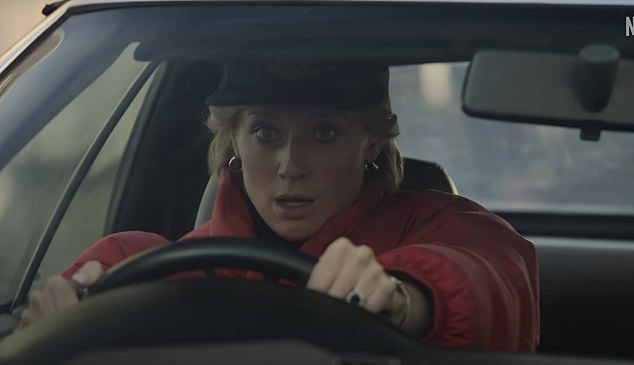 A clip from the trailer shows the fictional version of the royal wearing a very similar red puffer jacket and blue cap (pictured: Elizabeth Debicki playing Princess Diana in series five of The Crown)

Also missing from the Royal Albert Hall scene is the pearl and diamond necklace that became so synonymous with engagement that it sold at auction as the “Swan Lake Necklace” 20 years later for 10 million pounds.

Another outfit seen in the trailer, which replicates one of Diana’s famous looks, is one of the looks she wore on a ski vacation in Lech in 1994, where she paired a blue baseball cap in a red down jacket.

Also touching on the process of creating original costumes, Sidonie said putting together costumes for outfits that weren’t filmed might be more difficult than recreating the famous looks worn by actress Elizabeth Debicki on the show.

It was announced last year that Elizabeth would succeed Emma Corrin and play Diana for the fifth and sixth series, which will cover Diana’s death in 1997.

The actress said of her casting last year: “Princess Diana’s spirit, her words and her actions live on in the hearts of so many. It is for me a privilege and an honor to join this masterful series, which made me absolutely addicted from the first episode.